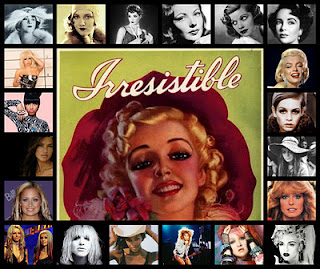 The decade began early with the world at war and ended broken. Thus The United Nations were established and a welfare state came to be.
Computers were being invented and familiar items such as the microwave oven, and Tupperware had made it's debut for the first time. The movie style of this decade was Film Noir. Classic films like Maltese Falcon, The Big Sleep, It's A Wonderful Life, Citzen Kane and Casablanca were box office hits. The careers of Lauren Bacall and Humprey Bogart were just rising. 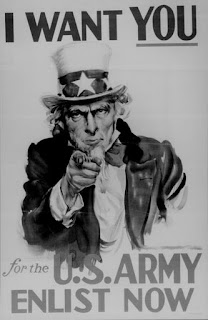 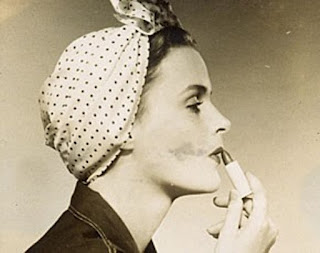 The world was at war in the 40's, which meant that resources were restricted everywhere. Women were venturing back into the work force while men were going to war. Clothing was greatly reflected this desperate time.Women's skirts became much shorter and duller in the 40's. Fabric and other resources were in such short supply, so a shorter hem was seen more patriotic than lewd during this time.Nylons were rarely available during the war which left women dying their bare legs with tea then drawing seams. Clothes were very much plain, Shoulders were squared off, and skirts were dead straight.  Mixing and matching fabrics was a new thing for women due to the fabric shortage. It made for a one hell of a colorful and lively wardrobe. Heels were becoming thicker and more sturdy with the help of heavy walking to and fro work from women trying to conserve energy.  These thick heeled shoes and basic A-line skirts are still worn today. They were considered one of the marvels of this time. Women's fashion became durable due to the work force. Undergarments were much more useful and industrial. Clothing need to be able to take a long, hard beating. Sleeves were short due to fabric rationing, shoulders were square due to military influence. Short and sportswear were being worn by women for the first time. 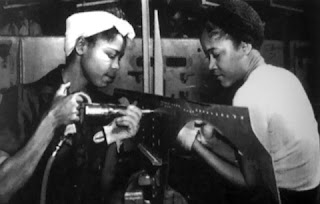 The 1940's era had refined women and slowly sat the stage for feminists who would later reflict the history of women. For the first time in our country's history, even the average women was expected to live out to different roles; the sweet homemaker, the wife of a solider, and a hard working factory employee. It didn't take long for women to understand their roles in society during this time. While men were at war, someone had to work in the factories and ship yards. It didn't take very long for the government to realize women were the back bone of companies during this time. They were the only ones producing equipment and the supplies needed to run their war. Some women thought they were doing their patriotic duty and were very delighted to enter the work force, while some women found it unfeminine to work outside the home and refused to work. The government soon sent these women to work by using flattery, cajolery, and outright threats. 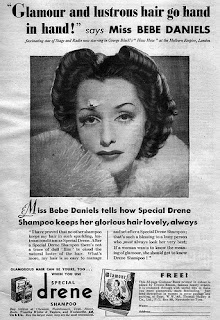 Hairstyles in the 40's were smoother and quite longer.  Thus giving the war years a more romantic, softer look. Bob haircuts disappeared, women wanted longer beautiful hair even if they had to pin it up for work.  Curlers and irons were created to give women wavier hair that could be pulled away from their faces. The hair trends were glamorous if not high maintence. For day time styles women would wear their hair down with long wavy curlers imidatiting Lauren Bacall. For evening looks, they wore their hair in a chignon with lots of curls to accompany it.  Fingerwaves and pincurls were still among these trends. Many women would go to sleep with curlers on or even did the dishes with their hair in a bandana to cover their pincurls while drying ever so tightly against their head. Hair dye wasn't unheard of at this time. Peroxide became  a way to have more fun.
Makeup was affected by the war during this time. This took women's thoughts off of romance and more towards simplicity. Lips were a true, patriotic red. Skin was creamy, powdered and smoothly pinkish. Mascara was still on women's face, though it was something mainly worn after work.  Romance and Simplicity fought eachother in the home. Women simply wanted to look beautiful either swing dancing or during working shifts. Makeup for women during the war years was a way of maintaining a woman's feeling of femininity in a world that was incredibly challenging for women expecially to take on a man's role. The defined style for makeup in this decade was simply glamorous. Full luscious lips and a more prominent eyebrow shape was making its way into fashion and slowly kicking out the pencil thin look. Eye makeup was kept to a minimum with very little eye shadow being applied. The main focus was eyelashes. Mascara was the main if not only accessory to the eyes.
Foundation was a slightly darker tone to your own natural skin color. Face powder used then had a bit of a light rose/peach tint. Rouge was still applied in circles but was blended out to the temples. It was applied in a triangle effect. Face powder was to create a beautiful rosy glow instead of the Cleopatra look from the 30's. 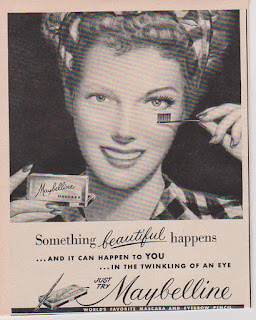 Eyes of the 40's started with a full yet well plucked eyebrow with a pronounced arch. Soft cream based shadows were applied to the lids and a brownish tan color just a tad bit darker then their skin color was applied to the crease but never went higher. then they applied many coats of mascara. Long, thick eyelashes were key. Though mascara was something mainly worn at night, if worn during the day women chose a natural brown color mascara. 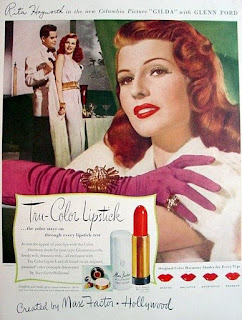 Lips were probably the most striking feature during the 40's. They were incredibly and stylishly done but with a subtleness to them. The upper lip was made to look roundish, giving women a sexy look without trying too look obvious. Popular colors of lipstick were, crimson, dark red, vermillion. pale red, and a cherry red.
I decided to stick to the working day look. The simplicity of throwing on a little bit of foundation, lipstick and mascara before heading to work. Many of these women figured it was simplier to wear less makeup, not wanting a extravagant look just to get dirty while working. Many women worked long hours in dirty situations either in a  ammunition factory or in a shipyard. You couldn't really stand to look fab with a face full of dirt. So simple I went. I used a lighter skin toned eye shadow, and a volumizing mascara paired with a bright red lip. That's it. Simple is key here. 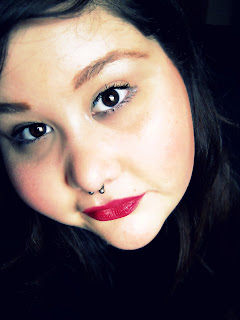 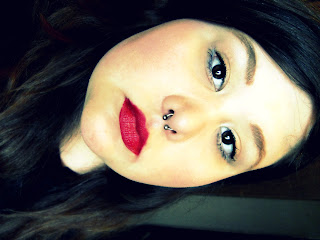